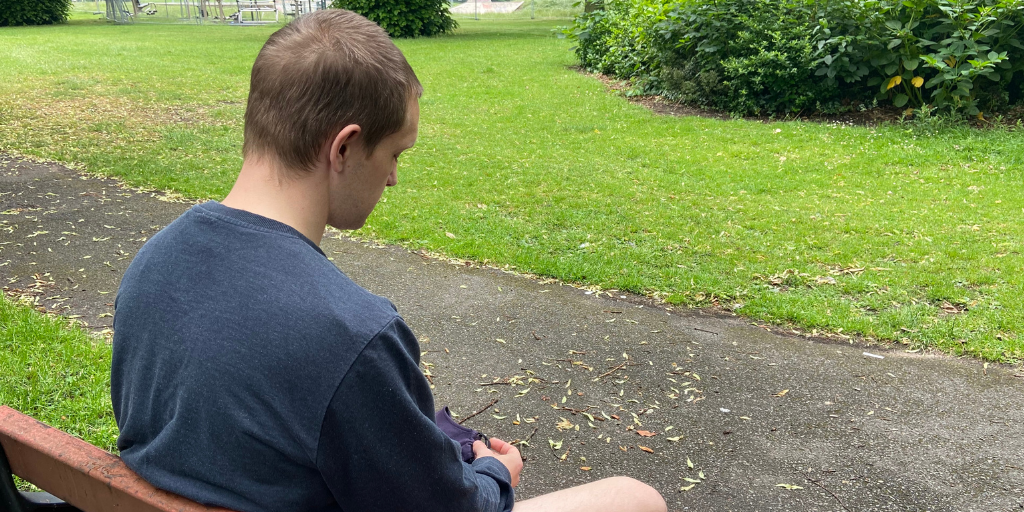 Having been released from prison, Steve was homeless. He struggled to adjust to life in a hostel and was evicted. He said:

“Last Autumn, after I was evicted, I came to The Bridge to help me make an appeal, which was rejected. So I was sofa-surfing, staying on my brother’s floor and with friends all over the county if I had to. I had such a disruptive life, travelling here there and everywhere with nothing of my own.”

With limited options, Steve continued to sofa-surf and sleep rough while accommodation was sought. His worker at The Bridge accompanied him to meetings and property viewings, recognising the environment that Steve needed in order to thrive, and advocating for other options. Steve continued:

“It was soul-destroying being homeless for that many months, stuck on different waiting lists. There seemed to always be something in the way. But my HOS worker never gave up and finally the Exaireo Trust re-examined their eligibility and offered me a place.

“I have somewhere safe to stay now. It’s me and a few other guys and I try to keep it as nice as possible, reporting repairs and even cleaning the cooker.”

“The HOS team and Reception team at The Bridge were so helpful. Even in referring me to organisations and taking me to appointments. If I couldn’t get there, my HOS worker took me and waited for me; going above and beyond what she needed to do.

“It was really hard not knowing Loughborough. I had to come here because it’s where the Council said my local connection is, because my parents live nearby. I wouldn’t have been able to do it without The Bridge. When somebody is in the worst situation of their life, they don’t give up.

“It’s the things you don’t think about that get in the way. Not knowing how to print something off, or fill out a form via email. Which bus to take to get to an appointment. Getting your own money out is hard because you don’t have an address for them to send your PIN number to. Everything stacks up against you. The Bridge always offered their help.”

“Even after I’ve moved into this flat with Exaireo, they still check on me; supporting me to make a Charity Link application for clothing and household essentials.

“When I first started with the service, there wasn’t even a future. Back then, I’d just been evicted, I couldn’t see my kids and I remember being sat in my housing interview being told I wasn’t vulnerable enough for help that night. It’s hard being told that, because I understand there isn’t enough properties and beds, but how do they know I’m not vulnerable at 4’oclock in the morning when there’s no one around?”

Since being housed, things have settled. His HOS worker completed a housing application with the Council, and Steve has been awarded a bidding number and hopes to apply for his own home. Reflecting on his journey, he said:

“I’ve been on holidays. I’ve had cars and houses. I went from all that to nothing. Still having fancy trainers on but not having anywhere to live. Believe me, when I say lives can change: there’s no better case than me. Three years ago my life was like a normal life: a household, children, girlfriend and a job.

“I didn’t deal well with my relationship breakdown and that’s what led to this situation. I was angry with who I’d become: the fact I’d let four people down who I shouldn’t have. Now, I’m not close to where I want to be with my children, who stay with their maternal grandparents, but we do speak via letter and I will always keep that up until I can be closer to them.

“When I was homeless, I had no chance. I couldn’t see them anyway, because I didn’t want them to see me like that. Not having had a bath for three days.

“To people in similar situation to how I was, my main advice is to stay away from illegal substances. I hadn’t touched it in my life and then suddenly it ended a marriage. It ended anything I ever built my life around. I’m clean now.

“The people who take your money aren’t your friends; you wouldn’t give your friends substances like that. Accept addiction treatment. You can’t be stable without it. Keep your head clear. Go to the meetings. Present to the Council. Be polite and be proactive in getting the help you deserve.”

“It is hard, but you can never give up. There is plenty of help out there, it’s wanting it and accepting it.”