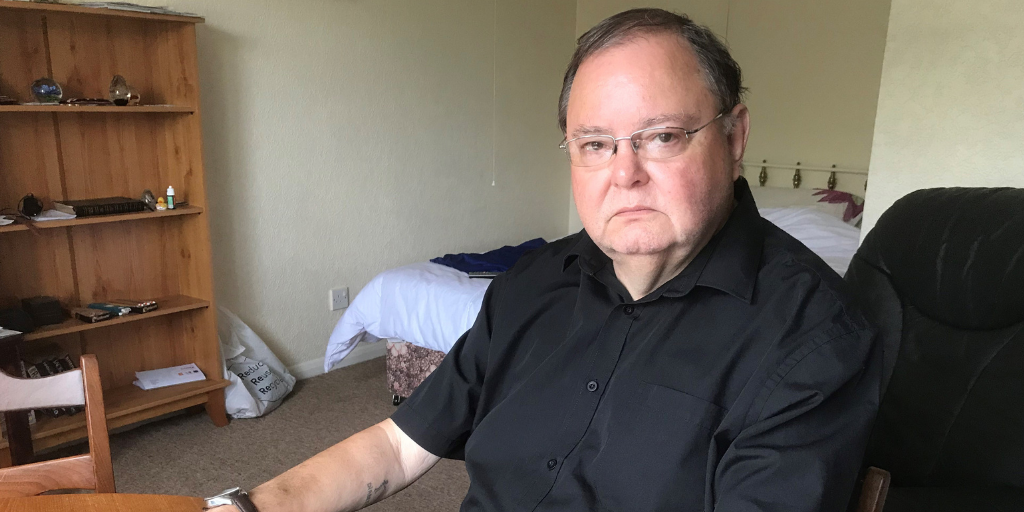 Melvin had lived in America for 11 years, before an abusive marriage forced him to make a return to the UK. Leaving everything behind, Melvin found himself on the streets. He spoke more about his story…

“I had to leave the USA because of domestic abuse. It works both ways and unfortunately for men, it’s not always as recognised as it is for women. I left and lost everything.

“My ex-wife suffers badly from mental health issues and it just wasn’t safe anymore. I didn’t think I’d be coming back to the UK to live, but the situation was getting worse. Although it was occasionally physical, the abuse was mostly mental and emotional. It has such an impact. I made the decision to come back; it was kind of forced upon me, but I don’t regret it.”

With two children in the area, Melvin knew that he wanted to return to Leicestershire. He said:

“When I arrived on my son’s doorstep at 11pm, I thought the future was non-existent. I had nowhere to go and I was prepared to sleep rough and I did for a while, as such. Luckily, my son’s boss provided accommodation for a short while, before Charnwood Borough Council had referred me to The Bridge.

“Without The Bridge, I wouldn’t be sat here today. I walked in and you couldn’t have found anyone more friendly; they are brilliant. I met my Transitions Officer, explained my circumstances and she really pushed to find me accommodation.”

“It is scary being homeless; you don’t know whether you’re going to sleep in a bus shelter or on a park bench. Is it going to rain? You don’t think of these things, but suddenly you’re there.”

Melvin was placed in temporary accommodation in Leicester, and then Shepshed. He added:

“In those weeks, my Transitions Officer worked hard on my behalf, supporting me and even helping me get from place to place. I was really lucky. I was allocated this flat for a year temporarily; then they decide whether you can stay permanently.

“I now have a housing support worker from the Bridge who helps me with all the paperwork at the moment. I have been lucky, a success story as such, I feel blessed that I’ve been given a second chance.”

Speaking on the rising number of homelessness nationally, Melvin said:

“I think some of it is due to the lack of support. I don’t think various authorities realise that there’s more people out there on the streets, falling through the net. It’s getting worse and housing provision needs to improve. I got my flat because I was lucky and through the hard work of The Bridge.

Now that Melvin is no longer homelessness, he has moved to our Support Services. He explained:

“My support worker is helping me with a lot of the paperwork to do with my housing. Also, we can chat and I ask advice and support.

“Without the one-to-one help, you can become isolated. My body is slowing down because I’ve had 4 heart attacks now, on due to stress of homelessness… but my head is still working ok! Nevertheless, it is easy to end up sitting on your own for hours on end.

“When I first moved in here, I had the curtains drawn for weeks; my support workers helped me really settle in. Having the support worker coming regularly is such a positive.

“I’ve really done a 360. I felt like I was at the bottom of a pit that was getting deeper and deeper. It felt as though I couldn’t get out- but now I can, thanks to The Bridge.”